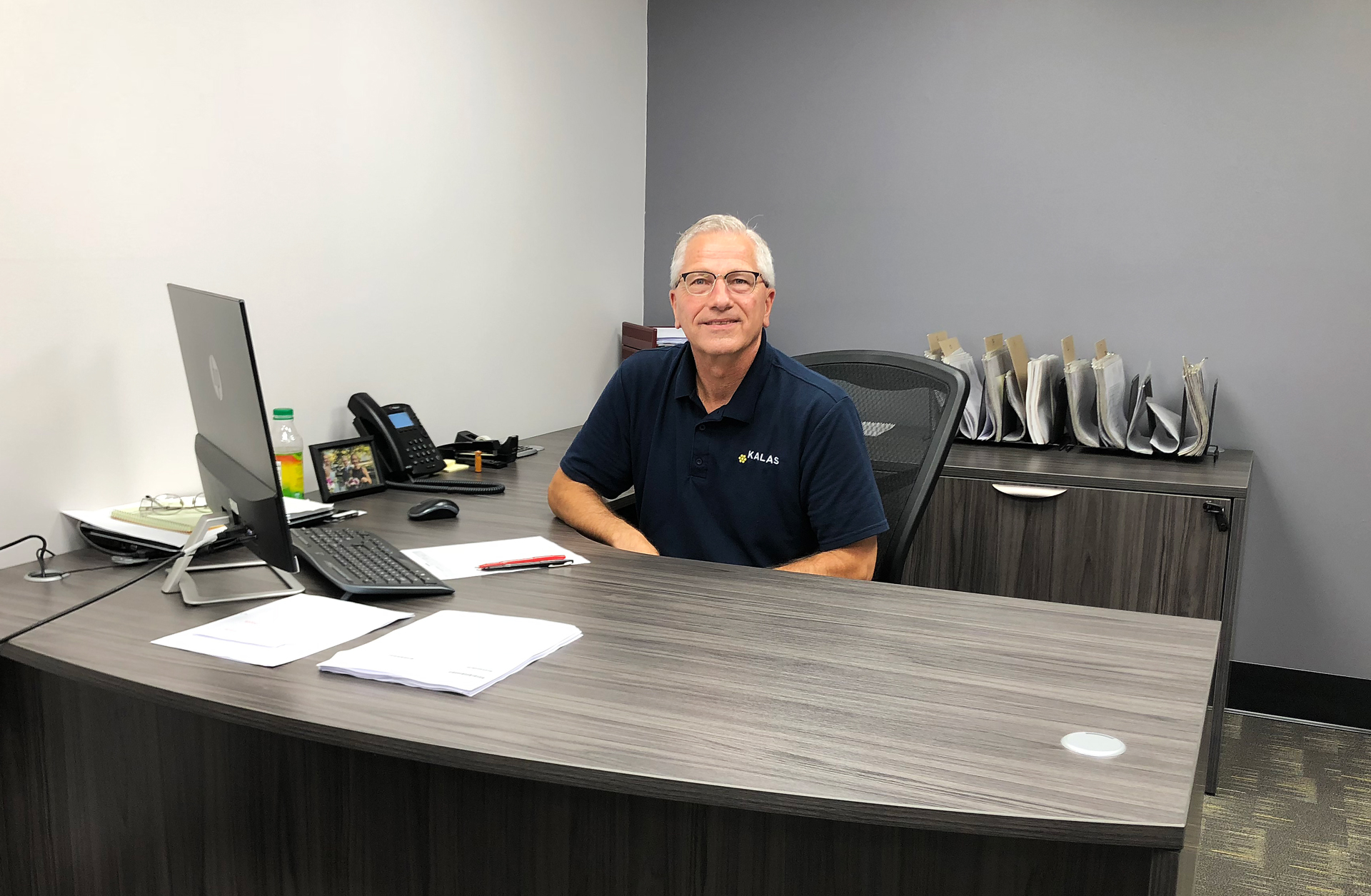 In anticipation of our organization’s 60th anniversary later this fall, we have joyfully celebrated our associates with the longest tenure. This month, we highlight Craig Hershey: Bulk Wire Production Scheduler at our Extrusion facility in Denver, Pennsylvania.

Craig has been with Kalas more than half of our six decades. He began working at Kalas in 1980, 38 years ago. At the time he was hired, everything Kalas did was operated out of what is today Plant 1. Craig worked those first years of his career on 2nd shift as an SJT cable strander operator alongside another long-time Kalas associate, Jay Miller. Being that all operations were out of one building and much smaller than they are today, Craig was also trained on operating battery cable & trailer cable work orders that needed to be finished up from 1st shift. When plant 2 was opened, Kalas got our first CV (Continuous Vulcanization) line and Craig was one of the first associates to ever be trained in operating that piece of equipment.

One of Craig’s favorite memories was from his season of working on our first CV. At that time, if a line was running and it had broken in the middle of the steam tube, they would have to figure out how to run a whole new line all the way to the bottom of the tube. After much trial and error, he and another associate he was working with had the idea of creating a parachute out of filters and using the steam power to shoot it through in the hopes it would make it all the way to the end of the tube and it did! To celebrate, he remembers Kalas founder Paul Witwer buying them a 6-pack of beer.

In 1987 Craig was offered the role of Production Scheduler where he works to this day. In his role, he is responsible for working out the allotment of resources for half of the plant’s each and every job. When work orders come in, Craig assigns and ensures each work center is properly reserved, purchases made and timelines met. With 31 years under his belt, he is an expert on this process and knows more about Kalas capacities, customers’ part number ordering habits and the best use of work center resources. Kalas is extremely grateful for his loyalty, hard work and earned expertise in scheduling our production.

Considering the sheer reliance on computer processes of Craig’s role, it is no wonder the biggest change he shares experiencing over his 38 years was the change from handwritten manual processes to computer-based ones. Currently, orders come in via e-mail or phone call, are entered into an electronic system via part numbers and the needed resources are all technologically associated with the job’s demands in our system. Craig then does his scheduling within the computer software which can instantaneously reserve our work centers and communicate with the purchasing department for resources needed. Before Kalas transitioned to computers, everything was done by hand. Orders came in via phone calls or postal mail. They were then handwritten on tiny cards and no part numbers were used. Those small cards were then attached to a magnetic whiteboard wall with calendar weeks. Someone would then arrange the cards within each week manually judging the capacity of Kalas work centers until a week was “filled up”. Craig would take all of the cards in the determines order, write the details on a small sheet of paper and physically walk those out to the work centers. You can imagine the scale of the transition when Kalas moved to digital! Part numbers were created, every process had to be coded into software, data entered, and associates trained on the new processes. That transition and even a more recent system upgrade were both very large changes Kalas and Craig have seen during our history!

Another favorite season of memories for Craig highlighted the sense of family Craig has experienced at Kalas. Years ago, Kalas formed a Relay for Life team in Denver called the “Kalas Wired Walkers”. They began when the very first Relay for Life event was held at Cocalico and participated for many years following. Each year, the team would hold large fundraisers at a chip & put golf course nearby where associates, families, Kalas vendors, and suppliers would all come together in support of a great cause enjoying food, prizes and a fun morning with family and friends.

The people he currently works with and has worked with over the years would be the favorite part of this longtime career. He truly feels his coworkers are like family and knows that no matter what, every one of them shares a common goal of working toward doing what’s best for each customer at hand. With the loyalty of several associates who also have Kalas histories as long as Craig, he has a deep shared familiarity which contributes to that sense of family – something Kalas is humbled and grateful to have within our walls. Craig values the people he works with and looks back fondly at the shared memories.

Craig is a very warm and highly valued heart at Kalas. In every memory and explanation of Craig’s work, you can sense the satisfaction and positive impression his almost 40 years with Kalas have created. Join us in celebrating Craig and thanking him for being such a quality and long-seasoned member of our family. Thank you for all of your hard work and 38 great years Craig!