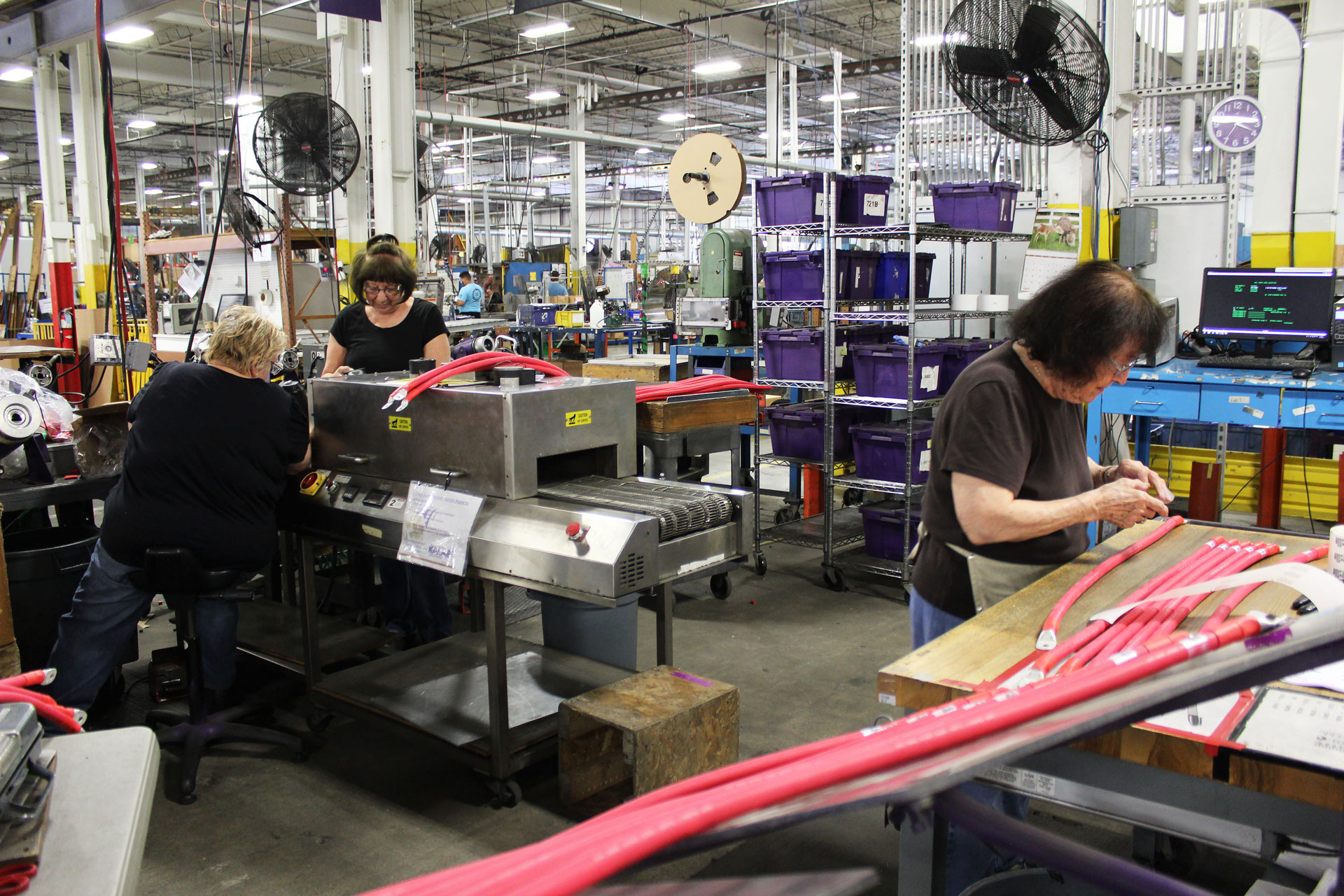 This month we have a fun group of honorees to introduce you to – meet the “Harley Girls” Marion Masternak, Marian Mellinger & Shirley Estell. From the moment of meeting them, you’d have no doubt they’ve been together for many years. Their laughter, humor and energetic bantering is infectious and reveals a work friendship forged through much history together.

Marion has been here the longest achieving her 25 year anniversary this coming November and Marian followed shortly after being hired the following August. Shirley has been with Kalas for 12 years, all of which working alongside Marion and Marion. Each woman living a slightly different story all coming together at the point of Shirley’s hire.

If you ask Marion about her 25 years, she will tell you she’s worked just about every machine that exists in our Lancaster Engineered Cable Products Division (ECPD) facility. She was hired when the company operated out of Denver alone. At that time, as well as many years after Marian was hired, associates had to train long hours on each machine they worked. This proved to be a huge asset to Marion’s work history. She was able to not only move around various jobs operating various machines, but she was also cell lead at times and had seniority to transition from less desirable shifts to her preference where eventually the other women would work alongside her as well.

Marian started 24 years ago this Summer and says her favorite memory is simply being hired. She, as well as Marion, worked in a Gerber manufacturing plant in garment making. She was a “floor girl” as she says, doing various tasks around that shop. When laid off she needed something and Kalas was there waiting to hire her to begin her now almost quarter-century career! Both women worked several lines of our ECPD remembering when Volvo and all of Kalas’ various customers on-boarded.

Before Kalas grew to Lancaster, Shirley joined our family. After a few short years, all three women would be transferred to our first Lancaster facility to be the women running our then Harley Davidson ECPD line and so began their self-claimed nickname the “Harley Girls”. Today our lines may have changed, but these three exceptional woman continue to work side by side forming memories and deepening their expertise in all they do. All three women work as a cable assembler or master cable assembler today and bring to Kalas’ family many qualities we celebrate – personality, commitment, hard work, skill and more. Our Kalas family wouldn’t be the same without them!

Through the years their brightest memory was an unexpected trip to tour the nearby Harley plant many years ago. Unannounced they were picked up in a limo, taken to see Harley’s facilities and out to lunch after. What a treat! Marion remembers they were able to peer into the interior of a bike revealing where the cables they would’ve manufactured by hand at Kalas cables fit inside of it. It was a fun day in their memory.

The biggest changes they would say they’ve worked through were the plant moves. Moving from Denver to Lancaster was a big deal for each one of them. They remember the excitement at first at the possibility and yet the challenges posed with a longer commute. Their memory of then and now is positively colored with how nice and helpful everyone working in Lancaster was which made the change smoother for each of them. They even say that of today. If asked what their favorite part of their work is today they say the variety of people they get to meet and work with and how diverse our Lancaster plant is.

It’s a real treat at Kalas to have not only one story of personal influence and history, but a group like Marion, Marian, and Shirley. This group of women is an ideal example of how we are a family at Kalas. Without these three, our company and our history would feel different. We are grateful for their spark and the presence each one of these three unique hand-working women brings.

Join us in celebrating their time with Kalas and thanking them for choosing to be such a valuable part of our Kalas family for so long!